Beijing World Champs - The Wrap Up

After a mammoth day of traveling across the globe, stopping off in Hong Kong on the way and almost missing our final flight, we made it back safe and sound in Oz. If you were using customer service and efficiency of processes as the variable to compare countries, then it was like waking up in a place were headless chooks run the register, and landing in a place that is run by a cross between Jennifer Hawkins and Sheldon from 'Big Bang Theory'.

The race was held on the 2008 Olympic course in the north Beijing district of Changping, and it was stunning. By far one of the best courses that I have raced on. The 1.5k one-lap swim was in the Shishanling reservoir with a spectacular backdrop and easy sighting of the buoys; the ride was tough and honest, with sections of constant inclines and a few sharp kicks to get you climbing, followed by flowing downhill runs and a few technical turns; the run was 3-laps that included about 1km of running in front of the grandstand and 3 trips up a steep incline. This is what I would consider a 'pure race' - a course that is difficult to hide from given the variety and challenges you had to tackle to get through it. 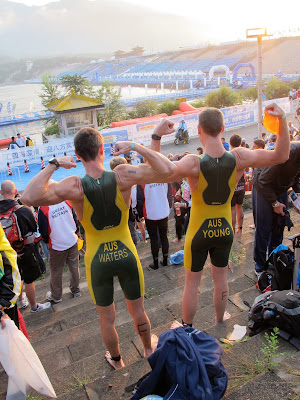 The conditions were perfect for racing. The Sprint Distance race was held the day before, and they lucked out. It was pouring rain and cold. For us racing the day after, this meant clear (for Beijing) skies after the rain and a nice mid-20s temperature. I couldn't have dialed the big man upstairs and ordered a better day! 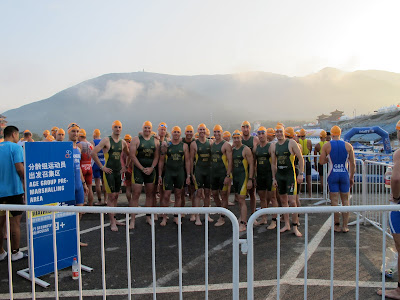 A huge Aussie team was in my category; ours was the only category in the Australian team to fill up (20 spots are available in each group). We managed to get a group photo in our 'holding pen'. 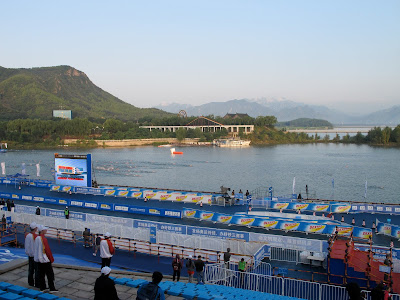 The swim start is interesting. There is no allocation for a warm-up swim - you are corralled like cattle into pens with your age group, until you make it to the pontoon and then 'GO!' For me, this bites. I find I am tight through the first part of my race and don't get a chance to shake off the pre-race nerves. This then plays on my mind, so for the first 150m I stress about it and my breathing goes out of whack. Something I need to work on, because I end up rolling my body too much to get a big face-full of air! When I got into a nice rhythm, I felt good in the swim. I sighted well, so did not swim an extra 200m as is normally the case. Apart from still swimming slow, I was happy with the swim. Plus the water was warm to boot! 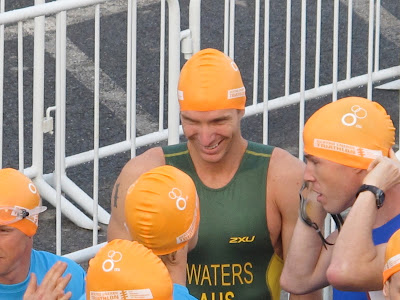 It was funny at the start; I was chatting to a few Brits and they were saying "good swimmers come from Australia, and with a name like 'Waters' you've got to be fast! I'm sticking on your feet!" Ha-ha! Suckers, man if you stick on my feet in the swim that works well for me because your time is going to be s-l-o-w! 35th out of the water (77 in my category) does not spell GOOD SWIMMER! 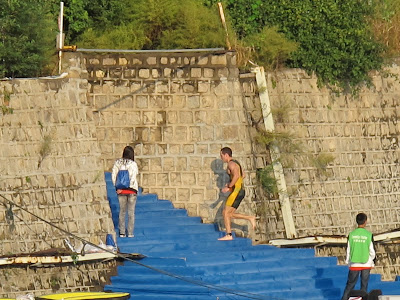 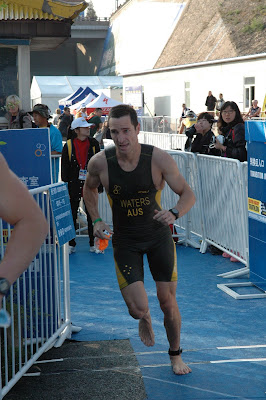 Into transition and out onto the bike course for 3-laps around the reservoir. This course was built for me (actually, it was built for the Olympics I think) as it required a lot of steady climbing at a small incline. I got into a good rhythm early, and found myself with 2 other Aussies on the first few laps. We each seemed to be good at different parts, so there was a bit of leap frogging (no drafting though - imagine traveling all the way to Beijing only to be disqualified for drafting!). At the end of the second lap we lost one, which left myself and Tim Molesworth. After the race I checked out his times: he came out of the water about the same time as me, spent a bit of time behind me on the bike and clocked almost the same time, and then smoked me on the run! Cheeky bugger. I've gotta say, the new E-114 was PHENOMENAL. The Di2 (electronic gear shifting) was OUTSTANDING! If you ever get a chance to ride Di2, go for it. Just be prepared for the longing you will feel for it when it is gone. Off the bike, and in 20th spot. 15 places made up over the ride, something in training must be going right. 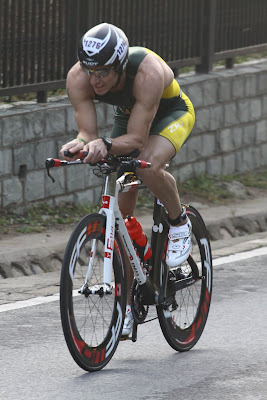 Onto the run and having ridden like there is no run, my quads felt like they were full of sand! Not a new feeling, and one I knew would disappear pretty quickly. The run starts with a 1k stretch (500m one way, then turn around) in front of the grandstands. Nothing like a crowd of people and fear of looking like a fool to make you run fast! Man did I soak up the moment. The reservoir on my left, the crowd on my right, running on the same blue carpet that they did at the Olympics! Outta this world! Running alongside athletes from different countries just adds to the surreal feel of it all, seeing all the different countries tri-suits was really cool. Again, I settled into a rhythm pretty early and set on locking it in. Easier said than done when you have just ridden 40k up and down inclines, and are running up a hill! My shins (Tibialis Anterior to be specific) were so fatigued, I felt like my feet were slapping the ground with each stride. 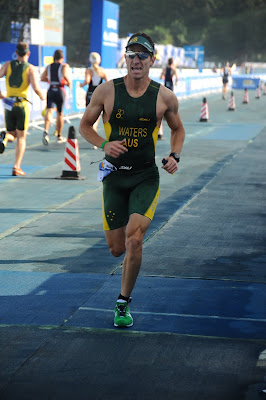 Coming onto the last lap, a guy from the USA passed me on a downhill section, with an 'F' on his calf (my category). I stayed on his shoulder for a bit but he started to pull away. That was, until the hill. I passed him about halfway up it and thought "this is it, about 1.5k to home, go for it!" I wasn't game to turn around, I just put my foot down (with a slap on the tarmac - not very elegant) and went for it. Up onto the blue carpet for the last 800m and with the crowd there I was pushed even more. It wasn't until the last turn around that I had a chance to see where he was - right there was the answer! About 20m between us. I could see the finish line and started the internal monologue - "hurt as much as you want body, in less than 90 seconds you can stop" "I want to stop now" "I've killed myself for 400m before" "ease off you're at the end" "the end is up there, almost done, make yourself proud". 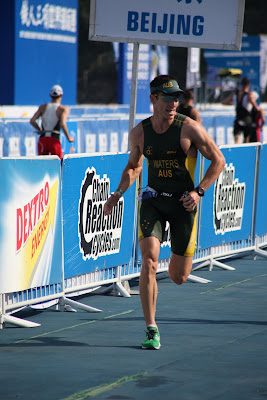 With about 50m to go I heard the chants of "Aussie Aussie Aussie - Oi Oi Oi" and someone yelling out "push push!" I turned and the US guy was sprinting for the finish! He was right there! I floored it, sprinting as best you can after 2+ hours of racing, and felt my hamstring start to cramp and the sudden change in pace. Go Go Go! I held him off and finished in 15th place, I don't think I have ever had such an exciting finish to a race! Looking at his times afterwards, he had the exact same finish time as me (he finished 16th) which shows how close it was. 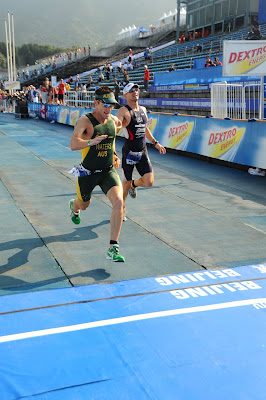 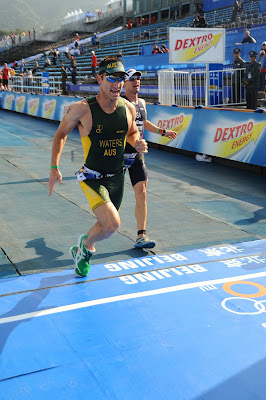 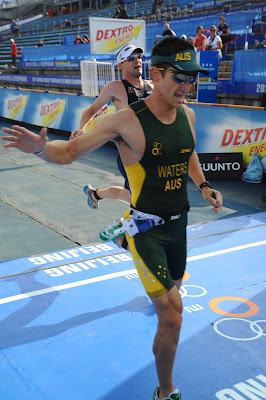 At the end of the day, I couldn't be happier with my race. I gave it everything and was able to take it all in at the same time. The day itself also turned out brilliantly. I hung out with a fantastic group of guys over the 5 days I was there. Great company; my cheeks have never been so sore from laughing! 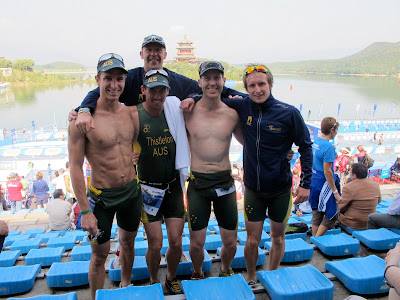 My beautiful wife was there to experience the day with me. She was outrageously famous with all the locals (and other countries) in her well-thought out 'mascot' outfit. Seriously, there was one stage where the professional photographers turned away from the race to take her photo - "you very beautiful". Not a lot of hot blondes in China I don't think. 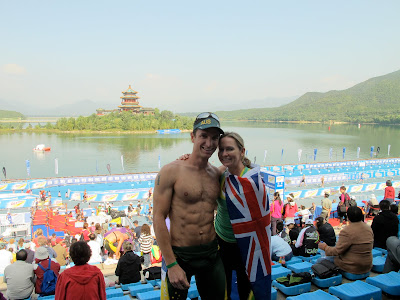 I met and chatted with Chris McCormack (2x Hawaii Ironman Champion), which was exciting and says something about him that he would take the time to chat with a couple of bums. He seems genuinely disgruntled at the state of affairs in the mens race, and the lack of drive of those racing to close the gap on the bike rather than let the Brownlee's burn off into the distance. Fair call I have to say! Where is the "as long as I breath, I attack" attitude of the past? 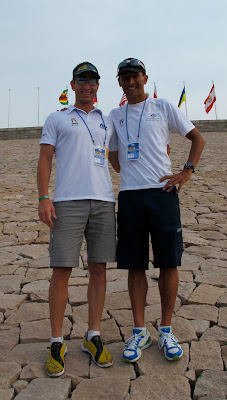 My wife also got a photo with Macca, Courtney Atkinson and Brendan Sexton. For tri-geeks this is almost like winning the lottery. But for Al, really it was just an excuse for her to get Courtney Atkinson to touch her I think! She went all jelly in her legs afterwards! 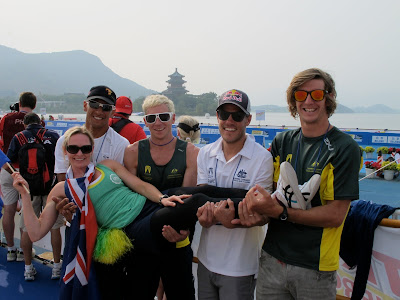 I managed to brush up against them all hoping some of their talent would rub off on me. That's why Sexton has a funny smile on his face I think. Maybe he experienced some unexpected movement... 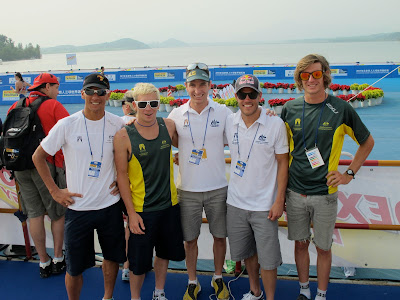 We also got to see the women's race, which was great (for a number of reasons, such as observing their running technique and *ahem* form). 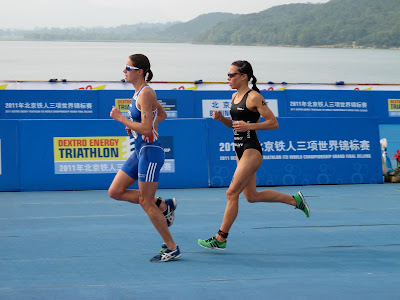 Andrea Hewitt raced a very smart run, sitting on Helen Jenkins shoulder for most of the run and then exploding at the end of the last lap to take it home (she is in black above). I must say she is one of my favorite female triathletes (again, for a number of reasons!). Helen Jenkins took the overall World Championship series with her second place in Beijing. 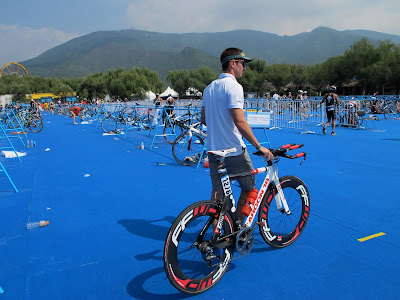 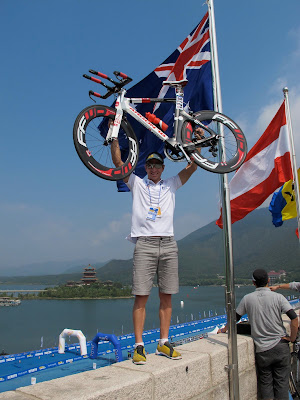 I loved the experience, and am keen to do it again. The Long Course World Championships are in Spain next year. With the boss (aka Allison) giving it the half-tick of approval, I think it may happen. We'll see. First, a few days of beer, ice-cream, and relaxing are calling me. Although with the glorious blue skies in Brisbane today, I could be tempted to head out for a light spin... 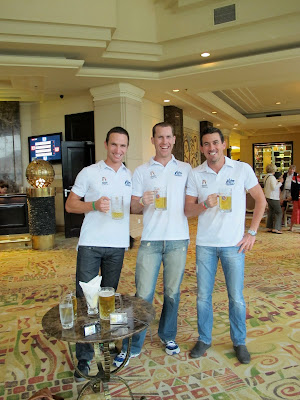 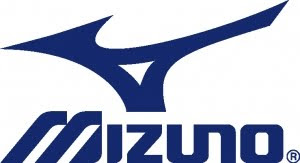 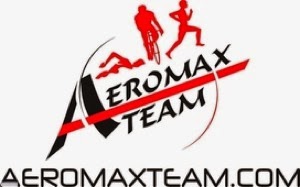 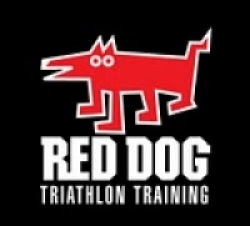 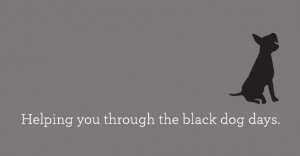